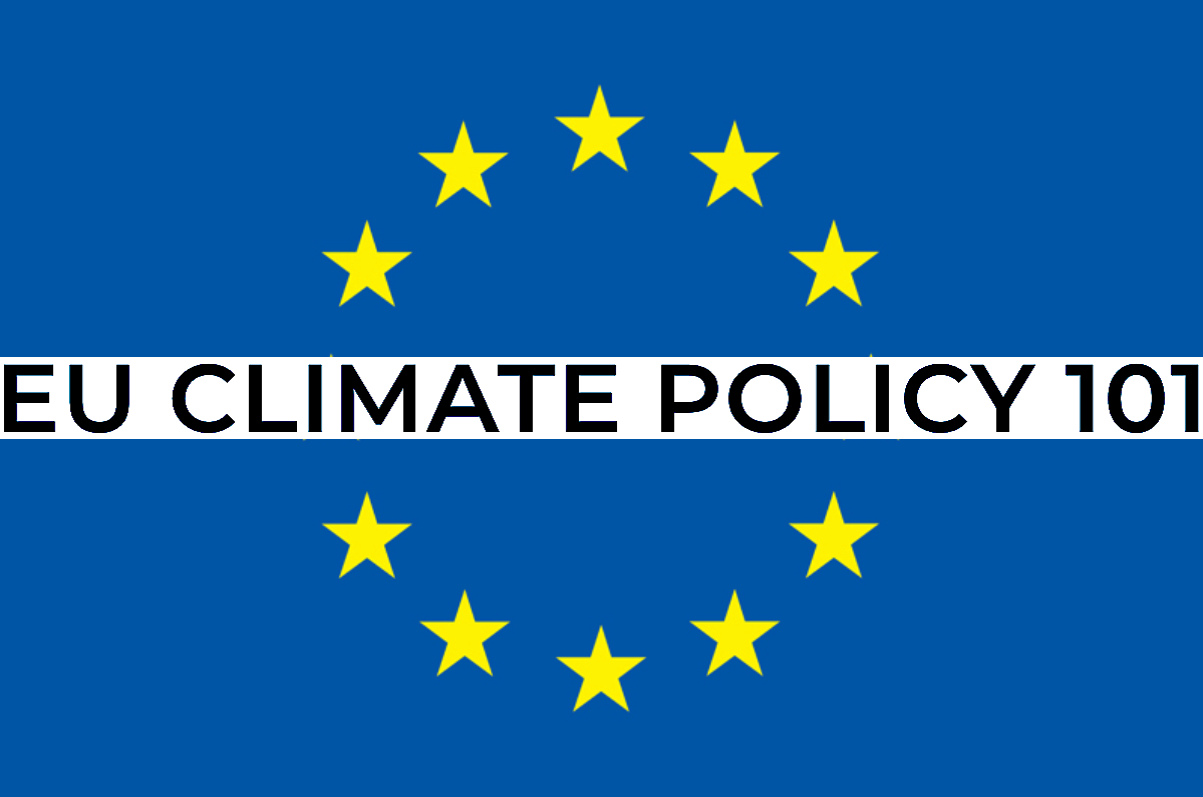 Collective action is vital when it comes to addressing climate change and reaching the Paris Agreement’s goals of reducing warming to 1.5°. Without question, with its objective to become the first climate-neutral continent by 2050, the EU is setting a strong example of climate action globally, both through their domestic and regional commitments, which we described in part three of this series. While the EU’s climate policy is mostly represented in what they refer to as the Green Deal, it is based on global treaties, such as the UN Framework Convention on Climate Change, the supplementary Kyoto Protocol, and the Paris Agreement.

The EU produces 8% of the world’s emissions, making it the third largest emitter of CO2. But considering that an ever larger share of global CO2 emissions (not reflected in these numbers) are created serving EU consumption, but originating from non-EU countries such as China, ambitious internal policy is not enough.

That is why the EU has made climate change a central element of its foreign policy by working with global partners in international climate negotiations to advance climate action. They also are the largest provider of financial support for climate measures to developing countries. However, if we are to follow the equity principle, whereas countries with a higher historical responsibility and with greater capacity to act should do more, European countries need to scale up their financial support in addition to their domestic emissions reduction efforts and in line with the principles of equity and fairness.

What is the Paris Agreement?

In 2015, world leaders agreed on ambitious new goals in the fight against climate change with the Paris Agreement. In other words, an action plan to limit global warming. Its main elements include:

– a long-term goal – governments agreed to keep the increase in global average temperature to well below 2°C above pre-industrial levels and to pursue efforts to limit it to 1.5°C

– transparency – countries agreed to report to each other and the public on how well they are doing in reaching their targets, to ensure transparency and oversight

The Paris Agreement went into force on November 4th, 2016 after the condition of ratification by at least 55 countries accounting for at least 55% of global greenhouse gas emissions was met. All EU countries were part of this ratification and committed to its contents. Supplemented by that Green Deal we mentioned earlier, the EU is looking to become the first climate-neutral economy and society by 2050 – namely by reducing emissions by at least 55% by 2030. However, for the European climate and energy policies to be consistent with the Paris Agreement, the EU needs to adopt a greenhouse gas reduction target of at least 65% by 2030.

The global financial system, not just the EU’s, needs to be urgently re-orientated around climate goals, equity, and just transitions to deal with the climate crisis and growing inequalities, especially since the implementation of the Paris Agreement requires substantial financial resources.

Developed countries are tasked with mobilising around 84 billion euros (collectively) every year to support developing countries. And today, the EU stands as the largest provider of that public climate finance; in 2020, they provided funding worth €23.3 billion to help support mitigation and adaptation actions that address climate change, reduce emissions, and build resilience against the effects of climate change. However, it is important to note that we still must challenge funding sources, ensuring that they represent clean sources of money. In other words, money not financed by the fossil fuel industry via banks or other financial institutions. (Read more about that with POW’s #divestthedirt campaign.)

Outside of dirty money, EU trade policy must also help facilitate a transition to a cleaner future. At the moment, however, EU trade policy too often restricts or contradicts climate policies. For instance, EU trade agreements facilitate the export of highly polluting cars and chemical products, which do not have to comply with EU environmental standards. Trade agreements and dispute settlement mechanisms should not maximise profits for corporations, but rather maximise benefits for people and the planet.

In another global setting, the EU stands as a party to the United Nations Framework Convention on Climate Change (UNFCCC), which is the main international agreement on climate action. In fact, it was during a conference of the parties (COP) to the UNFCCC in 2015 that countries actually adopted the Paris Agreement. The UNFCCC is one of the three conventions that were adopted at the Rio Earth Summit in 1992, when the international community recognised the need to act collectively to protect people and the environment and to contain greenhouse gas emissions. It has been ratified by almost every country in the world.

The United Nations Climate Change Conference (COP26) brings together leaders across the world to step up global action to solve the climate crisis. COP26 was the 26th meeting of the parties to the convention and was hosted by the United Kingdom in partnership with Italy for 2021. In 2022 the COP will be hosted by Egypt.

At COP26, two weeks of negotiations between UNFCCC parties included increased fund commitments to help developing countries tackle climate change, the adoption of the global methane pledge, and the finalisation of the Paris rulebook. They also re-committed to engage with global partners for:

EU foreign affairs ministers approved these and other COP26 outcomes. However, as has been shown by numerous reports, the 55% emissions reduction goal by 2030 that is leading current EU efforts is not compatible with staying within the 1.5° limit. The key entry point for the EU in 2022 will be to turn their climate and energy legislative package ‘Fit for 55%’ into one that is ‘Fit for 1.5°C’, which would ensure significant emission reductions in the order of 65%. Furthermore, developing countries are still far away from meeting the 100 billion USD a year climate finance goal and no concrete steps to meet it were agreed at COP26.

At the end of the day, climate policy cannot be separated from foreign policy. As the landscape of Europe shifts to one that is more “green”, we can expect to see a change in inter-country relations across the globe. For example, the increased need for clean-energy products would likely require stronger relations between the EU and China, who dominate the market for minerals needed to power wind turbines, electric vehicle motors, and applications in other clean tech fields. Or, as the EU reduces its fossil-fuel use, they will likely need to import energy that comes from renewable electricity, made in countries with strong solar and wind energy potential, such as Algeria or Morocco.

But is there anything the EU could do to push other countries to begin their own “Green Deal” journey? One idea is to require strict environmental regulation compliance as a condition to access the EU market. The EU could also export the European Green Deal through sustainable energy investment in developing countries. This would not only help EU companies enter rapidly growing markets, but boost economic development and diversification in partner countries.

For long term success and global change, the EU will have to work with other major economic powers (such as the United States) to establish a type of climate club, whose members must apply similar carbon adjustment measures and abide by the club’s objectives and rules. This is why, for COP27, the EU should come prepared to make clear proposals on how the collaboration of governments can accelerate action towards the required 1.5°C emission reductions for this decade, and how voluntary announcements from country and private sector alliances can be tracked.

Do you believe the EU has what it takes to remain the global leader in climate change policy? If you want to play your part, support your member state, and uphold the commitments needed for a cleaner tomorrow, check out our open positions or find out how you can get involved.